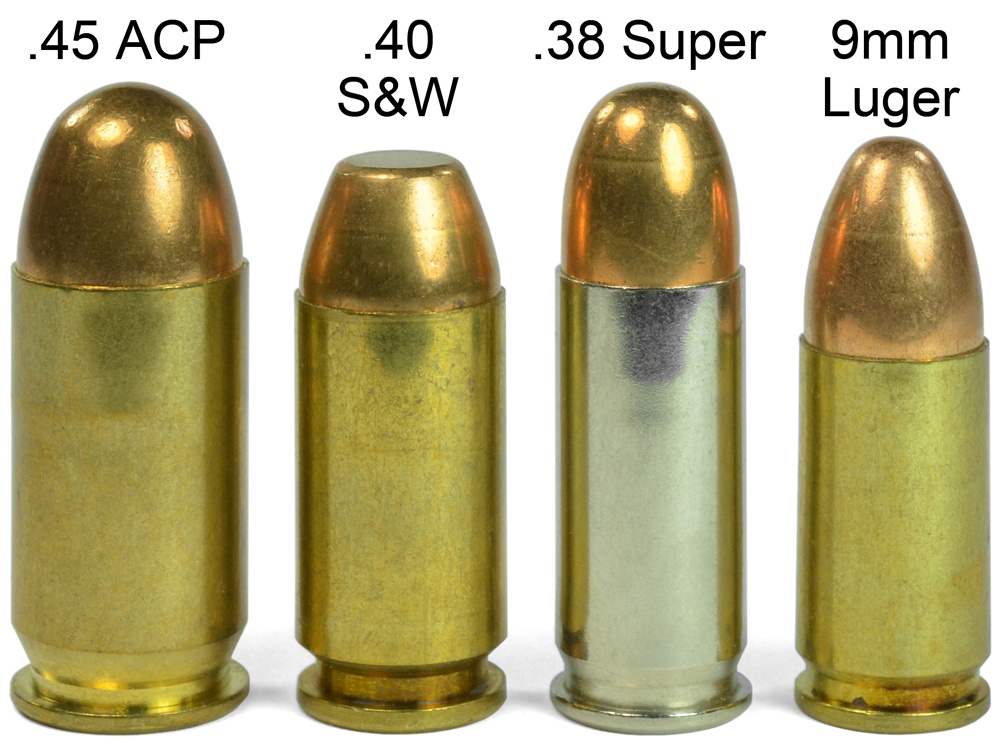 You’ve already got a great 1911 but you want to shoot a different caliber out of it. No worries, we’ve got the master list here of what you need to change out. For each caliber change you’ll need to swap out the barrel, recoil spring, magazine, and ammo. Outside of those core caliber specific parts, it depends on what you’re starting with.

Have .45 ACP – Switch to Anything else

.45 ACP doesn’t play well with others so changing from, or to, .45 ACP requires all the caliber specific changes.

This is an easy one. 9mm and .38 Super are sister calibers in this case. Your list is very short…

This is the medium list. These calibers all share a bit more parts but not quite as many as going between sister calibers.

As you can see, changing out your caliber isn’t such a daunting task. For most calibers, it’s a minor operation. If you really like to tinker around, there do exist universal ejectors that work with .45 and all others. Outside of that, for 9mm, .38S, 10mm, and 40S&W… you can easily create your top ends of choice and in a way, hot swap your upper. between the various calibers.

What to look out for…

Barrels come in 3 varieties for their ramp.

When changing out your caliber, make sure the the ramp type remains the same or it won’t work for your frame!

Also note that if you’re using a bull barrel and a reverse plug, you should use a guide rod that either has a take-down hole in it, or is a 2 piece guide rod.

What is the difference between conventional and variable recoil springs?

With a conventional spring, all coils are spaced equally apart, except for the closed ends. In a variable recoil spring the space varies between coils with less space at one end and more space between coils at the other end.

Should I use a conventional or variable spring?

Check out all of our variable recoil springs here

The 3 most popular 1911 recoil springs are available in chrome silicone material. While chrome silicone is an excellent material, it is a softer material and does not offer the tensile strength of Wolff’s proprietary HTCS spring material (the material from which most of their springs are produced from). We offer these springs due to customer requests.

Chrome silicone steel recoil springs resist taking a set even after thousands of compression cycles for improved performance and reliability. Available in three power ratings, so you can match spring weight to your specific gun and the type of load you shoot. For .45 ACP, use Reduced Power 14 lb. spring for target loads with lighter than standard bullets or powder charges, Factory Standard 16 lb. spring for all-around reliability with the widest range of ammo, and Extra Power 18½ lb. spring for smoother cycling and less slide battering with heavy loads.

Check out all our Chrome Silicon recoil springs here.

We’re happy to welcome three new brands to the shop. We now carry Caspian Arms, Nighthawk Custom, and Wilson Combat. There is a great selection from each brand available and the product lines will continue to be expanded. To celebrate our new additions we’ve got two great coupons to take advantage of right now:

Take advantage of these deals today! These coupons expire August 23rd and cannot be combined with any other offers.

Many of our customers like to carry with their firearm and are specifically looking for a flush fit magazine. We’ve listed some magazines below that have no base pads, bumper pads, or extended bases. These magazines have either a welded or removable flush fit base. Please note that this is not an all inclusive list. There are lots of flush fit magazines out there that may not be listed here. We’ve started the list with magazines we carry and will continue to add additional magazines over time.

If you’ve ever wondered what the stock spring weight is for your 1911, here is a great place to start.
* All weights are in pounds.

Did you buy a compact 1911 only to find out that you just don’t have enough space to properly grip the gun and control the recoil? Well if you did, there are some solutions out there for you. I’ll describe a few for you here.

No matter your reason for buying a compact gun, if you’re going to extend your grip with a larger than stock capacity mag, make sure that the new capacity mag is legal in your state.
As always, follow all local, state, and federal laws regarding firearms. Keep your guns locked up securely when not in use and be a safe, knowledgeable shooter.

After our recent family trip to the range, each of us responded to the recoil from the rifle differently. Both girls shot the same rifles (so did the guys), and only one girl ended up with broken blood vessels from the recoil of the gun. So, to help reduce the chances of this on the next trip, as well as the bruising and soreness from a full day of shooting, we’ll look into ways to reduce the recoil of the rifle as well as how to reduce the amount felt by the shooter.

Below are some things to do to your rifle or to keep in mind when buying a new rifle to reduce the amount of recoil produced by the gun:

Below are a few ways to reduce the amount of recoil that the shooter feels:

I hope you enjoyed our talk on rifle recoil. Stay tuned for more great gun guides, tips, and news.

Hooper Gun Works got a call recently from a customer who was having difficulty installing standard 1911 45 ACP Mags into the Rock Island Armory 1911.  There are a couple of things that can cause this, over-tightened grip screws being the most common.  Another cause lies within how the mag release button (or mag catch if you prefer) is cut from the factory.  Sometimes the fit may be so tight that the magazine cannot push aside the inner part of the catch to engage with the slot in the magazine body.  There is also a little bit of variance from magazine to magazine and between manufacturers that can make this inconsistent.  Here is a test to know if you are having this type of problem

How to fix:  There is too much metal on the part of the mag release button that engages the mag body.  A gunsmith can carefully remove the right amount of metal and create the desired shape to engage with your magazines.  It does not take very much removal.  It is also a good opportunity to change out to a machined tool steel mag release button, if you don’t already have one.  The gunsmith charge will be about the same minimum $50 either way, and you can provide the new part.

CheckMate is a fine manufacturer of 1911, M1A, Desert Eagle, and Beretta magazines.  For their 1911 magazines, three type of feedlip designs are offered:  Wadcutter, Hybrid, and GI.  There is much history behind these designations.  The GI design dates back to the origins of the 1911.  The Wadcutter came later, followed by the Hybrid which is more of a modern creature.  Most mags these days employ a hybrid design.  Strong chances your OEM mag that came with your 1911 did as well.  Here is a detailed picture (courtesy of CheckMate) showing the three types.

Which feedlip type to use really comes down to total round length.  The original spec for a 230 grain “ball” ammo was 1.26 inches overall length.  This is what the GI feedlip was designed around.  If all you shoot is traditional ball ammo, this is the feedlip for you as you will experience the highest level of reliable feeding.  However there is a tradeoff.  Hollow point (and wadcutter) rounds may be as short as 1.20 inches, and that difference is notable.  Load a GI mag full of these shorter rounds, and the reliability level decreases.  The degree of which varies from gun to gun.  What happens is that in that 0.06 inch difference, the ball round had hit the feedramp, but the shorter round can get pushed upwards and cause a jam.  It doesn’t take much really.

The hybrid feedlip is a combination of both designs and generally works well for all.  If you find yourself shooting a mix of ammo and want the greatest selection of caliber options, and capacity, this is the preferred option.

For a 1911 there are many items that contribute to proper feeding. The above assumes a properly functioning 1911 of reputable make to begin with, and one that is shooting standard pressure ammo at bullet weight between 180 and 230 grains, with a recoil spring of standard rating to +1 strong as described by the extra power Wolff springs.  With this in mind, it is also necessary to have extra consideration when using the fantastic 10 mm caliber.  The loads vary greatly for this round, and a 10 mm 1911 needs to be designed as a system for handling the 10 mm cartridge.